Of the common things that come up in “shop talk” at Coastal Expeditions, “manifesting abundance” is among one of the more common themes.  Much of the time we use it in a lighthearted, joking way, like when a guide shows up just in time to take the trash to the curb or when the sky clears as a tour is about to take place. But often, we’re talking about more than that.  Like creating happiness, doing the right thing as a company and as individuals and believing that the next great thing is just around the corner.  Little miracles and signs happen every day if you’re eyes are open to them.  And when it came time to design this year’s sea turtle shirt, abundance manifested in the form of Betsy Brabsen.

First of all, shame on us for not knowing right off the bat who Betsy is in the turtle conservation world.

I came to know Betsy because I saw her t-shirts in the Sewee Outpost in Awendaw.  Brooks Geer, the owner of the Outpost, has done a good job of stocking that store with everything you want and need, including a selection of Awendaw-esqe shirts that make me jealous every time I shop there.  (Why couldn’t we get our shirts to look so good?  When are we going to hire a kayak guide with a major in graphic design???)

Finally, one day I tore the hang tag off a t-shirt and asked Jenna at the check-out counter how I could get in touch with Betsy Brabsen.  And since I average about 1 biscuit a day from the Outpost, she gave me the number.  I called her up, and from the moment we first spoke on the phone, I knew I had the right person to to the 2016 design. 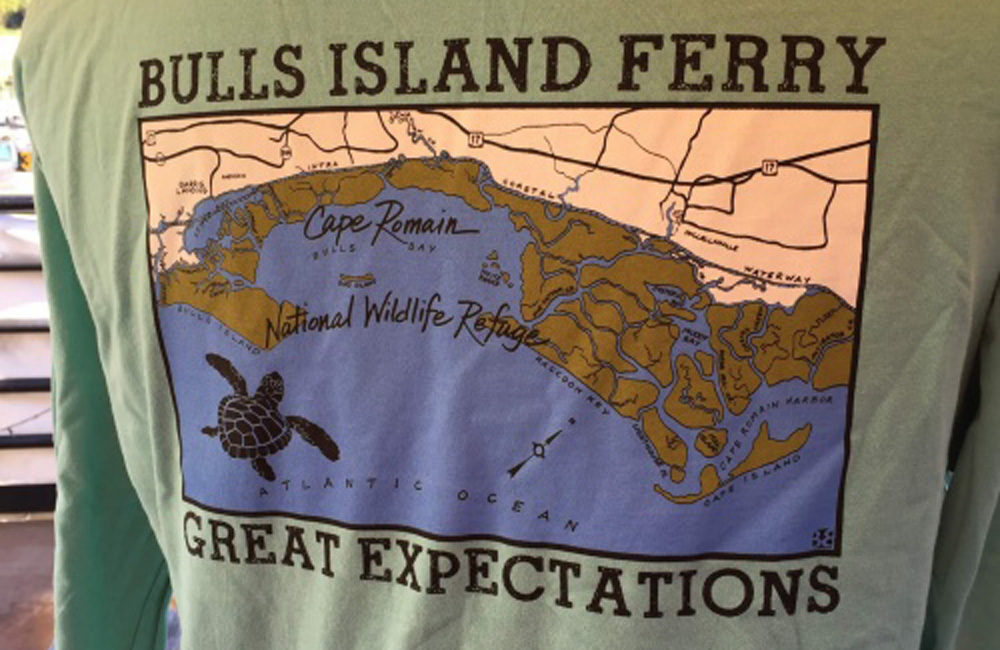 Fittingly, our brainstorming took place at the table at the back of the Sewee Outpost, under the watchful eyes of the stuffed moose and boar (and coincidentally near the biscuits).  She took the Cape Romain portion of our Coastal Expeditions Map for inspiration and labeled the creeks, islands and bays in her beautiful hand lettering.

From our conversations (seriously, I felt like I had known her for years after our first meeting), I found out that she was passionate about sea turtles and had been volunteering for years.  True to her character, she never told me that she was Betsy Brabsen, Turtle Hero.  It wasn’t until recently, months after we collaborated, that I realized who she is.

Betsy has been a project coordinator for South Carolina United Turtle Enthusiasts (SCUTE), monitoring beaches north of Georgetown in  DeBordieu Colony for loggerhead nests and hatchings.  And as it turns out, her sharp eye identified a plant growing on South Carolina beaches that was detrimental to sea turtles.

Beach Vitex (Vitex rotundifolia), is a nonnative species from Japan and Korea that was planted along the coastline of South Carolina and North Carolina to prevent beach erosion in the 1980’s.   It easily adapted to oceanfront dunes, covering them in a thick mat and crowding out vital native species like seaside panicum and American beachgrass. While it was good for dune stabilization (especially for people with beachside homes), it was terrible for wildlife that depended on the dunes for nesting, particularly sea turtles. 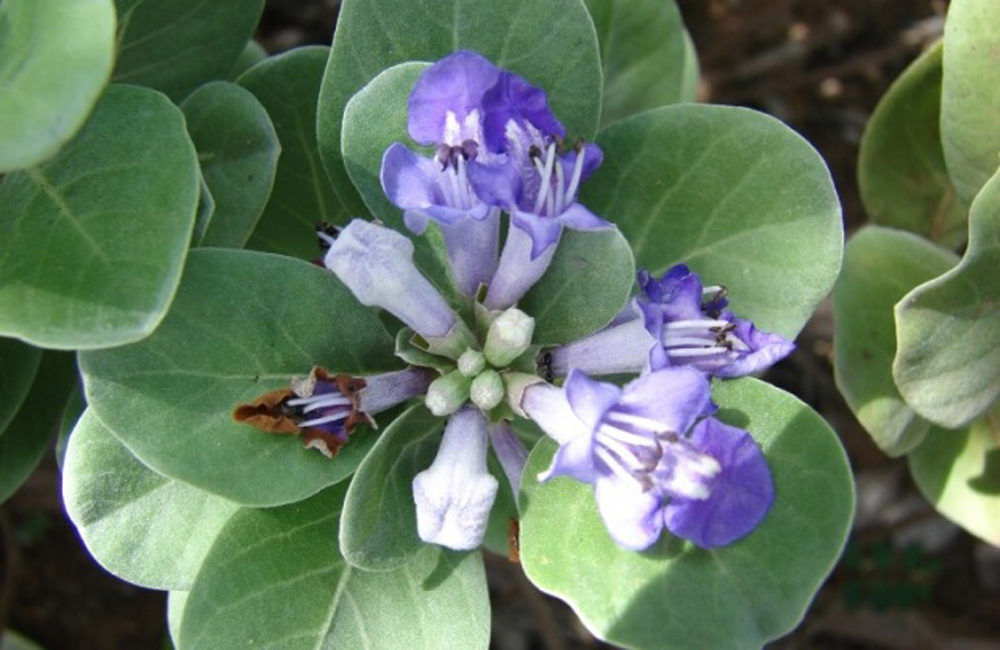 According to an article in Southern Living (Turtle Love, September 2007), Betsy noticed that the vine was preventing female loggerheads from digging nests. And because the vine grew so fast, often it would grow over nests preventing hatchings from being able to emerge.  She took a piece of the Beach Vitex to Clemson for identification, and they confirmed that it was an invasive species.  From there, the Carolinas Beach Vitex Task force was created.  Funded through U.S. Fish & Wildlife and Clemson University, they were able to eradicate this vine from the coastline. 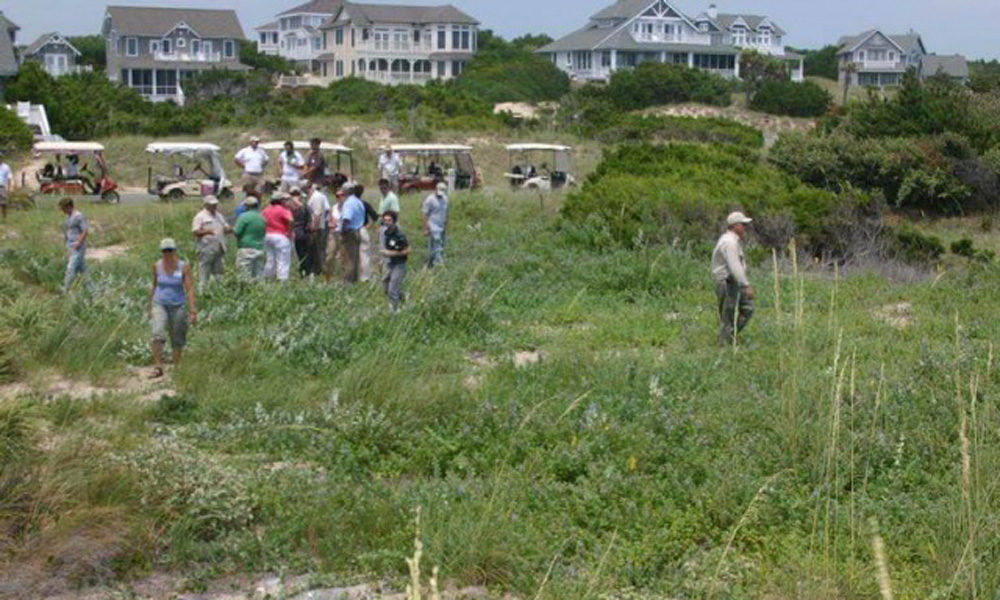 Beach Vitex covering the dunes of a Carolina Coast

Let me stop here for a moment.  Do you know how hard it is to eradicate a nonnative invasive plant once it is established?  Think about Kudzu.  Once a plant or animal has had the chance to take hold (literally, in this case), it is very difficult to make it go away completely.  Latent seeds could break their dormancy years and years later, ensuring their survival into the future indefinitely.

So, back to manifesting abundance.  Betsy and I were destined to meet.

Why?  I have actually talked about her in lectures I have given to horticultural groups throughout the southeast when I speak about invasive species (I’m a plant pathologist and horticultural consultant pre-motherhood).  I’ve known her “story” for years, but I didn’t know who she was!

Beyond that, who better to design a sea turtle shirt for the Bulls Island Ferry than the Betsy Brabsen, crusader for sea turtles.  Every penny that we earn from the sales of these shirts go back into Cape Romain National Wildlife Refuge to help them buy supplies like wire caging, buckets and really whatever they need.  It doesn’t fund the project, but it lets them get Sharpie markers, baggies and “incidentals” without having to pay for it out of their own pockets.

The next time you are on the ferry to Bulls Island, remind Nick and Wil that you want to see the “turtle shirts.”   We did them in lots of colors, long-sleeve and short-sleeve, and they are designed by someone who manifests abundance.