An ounce of prevention.

It wasn’t until Governor Nikki Haley held a press conference on Tuesday afternoon that I was willing to admit that there could be a hurricane heading our way.  Until then, it was “deny, deny, deny.”  Following the evacuation notice, schools closed and businesses followed.  And I began to prepare to leave with Olivia (#futurekayakguide on Instagram), Chris was getting everything together at Coastal Expeditions with our team of guides and office staff.

And so with a need to get ahead of the inevitable traffic– and knowing that there was nothing good about staying in town with a 3-year-old, I packed and set off for Georgia.  And I left Chris here to make decisions about how to get Coastal Expeditions secure for what was to come.  I grabbed a few mementos and walked out the door, hoping that the current track would hold.

That day, the Coastal Expeditions team pulled kayaks, stand-up paddleboards and gear in from our Isle of Palms and Folly Beach outposts.  They secured everything that had to stay there and came into our headquarters on Shem Creek in Mount Pleasant to do the same. Chris and the captains pulled the 3 smaller boats our of the water to ride out the storm on trailers.

On Thursday, Chris made the decision to dry dock Caretta, the 49-passenger Bulls Island Ferry boat at the shipyard.  It was almost the last boat in, with the Charleston Water Taxi bringing in the last two boats.   It seemed like “erring on the side of caution,” as the storm’s track was still offshore, with expectations that it would be nothing more than a tropical storm by the time it made it to Charleston.  We even heard word from our friend Jamie Jackson, an adaptive paddling guide from Key Largo, that Matthew had wisped past him without issue.  The text read that that he was “high and dry…Matthew passed right by and didn’t even say hello.”  Okay, that sounds good. Stay relaxed, Kari.

Y’all, I stressed myself to where I now have a cold.  I made myself sick.

I’ll spare you all of the details after that because I would like to have Chris tell you about the hurricane from his perspective, but the eye wall did, in fact, come over the house.  And Chris and Gates were in the eye of the hurricane as it made landfall in Awendaw.  I’m still stunned that it had hundreds of miles of Atlantic seaboard where it could have come on shore, and it did it at our house.

During that time (a little while before the eye came over), an American Oystercatcher flew into the screened porch and they brought him inside to rest until the hurricane passed. 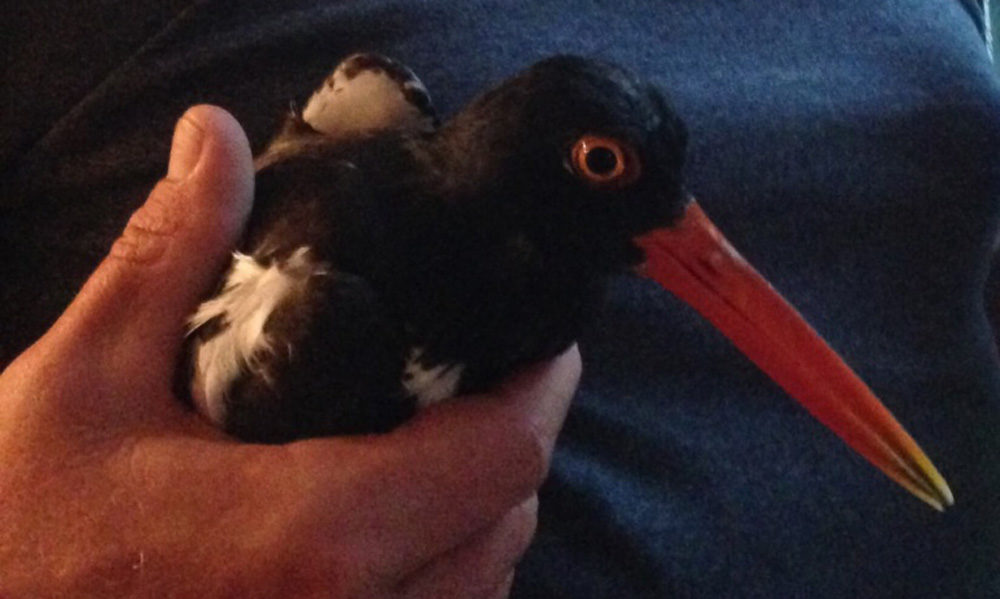 They made a “nest” for him and let him ride out the storm in the darkened pantry.  As soon as they got through the eye and the winds settled, they let him go.

As the tide came closer to full, the storm passed and the surge flooding in our yard started to quickly drain (strange, right?).   This was a little after 11 a.m.  The hummingbirds never stopped drinking sugar water from the feeder throughout the storm. Our cat waited until the storm was a full tilt to make an appearance at the door. Later, our neighbor said that his horses calmly stood in the pasture through the duration, not minding the wind and rain.  Birds like Marbled Godwits, Black-backed Gulls, American Oystercatchers and Ibis showed up in the front yard (and in the parking lot at Garris Landing) looking for a place to rest.   And then it was over.   And the clean up and putting back together of our little business began.  If you are thinking about going paddling or out to Bulls Island, please call us up or book a tour online.  Our guides have now missed a week of work and they are anxious to get back out– and the weather could not be more beautiful.

We were so lucky.  Edisto Island, Hilton Head, Harbor Island, Fripp Island are just beginning the process to get back to normalcy.  And to the north, the flooding that has happened throughout North Carolina, both inland and on the coast will continue to cause damage for weeks.  The watershed that includes the Black River, Little Pee Dee River and Waccamaw River is expected to have water levels that exceed the 1000-year-flood from last October.

As I finish this up, I just heard from Chris that he is driving through a couple of feet of water near the Black River near Andrews, South Carolina.  Checking on a site there, Gates and Chris had to kayak down to where a john boat had been tied up during the storm and they somehow retrieved the sunken vessel.  The Black is rising quickly.

COASTAL EXPEDITIONS FOUNDATION LAUNCHES OUTSIDE IN

“There is something magical about watching a child experience the ocean for the first time.  No lesson of mine could ever compete with the moment a dolphin surfaces and a group of kids hear it breathe. I will forever remain...

All About Hampton Plantation