It’s that time of year when Southerners begin to dream about the summer bounty that is around the corner.  Watermelon, tomato, okra, summer squash, eggplant and pepper are just a few weeks away from their first harvests.  While you can get some vegetables that are pretty consistent year round, tomatoes are significantly better in season.

To be frank, tomatoes from the grocery are barely worth consuming.  They are tasteless cultivars grown for their thick skins and long shelf life, characteristics that suit picking tomatoes green and shipping them long distances.  I want a tomato that requires a thin, sharp knife to deftly cut through the delicate skin.  A tomato that has to be sliced on a wooden cutting board so that there is something to keep the juices from running off the counter.  A tomato that can hold its own on a plate against casseroles and other dishes with only a sprinkling of salt and pepper.  Ah!  It’s great to be a southerner!

I’ve grown tomatoes many different ways over the last 20 years. In containers in downtown Charleston, in red clay near Social Circle, Georgia and in the sandy soils of Awendaw.  I’ve had some years where I never had a red tomato (squirrels, too shady) and years where I couldn’t find enough ways to prepare the harvest.  My worst tomatoes have been grown in containers.  My best have been plants that were, perhaps, a little neglected at times.

What I know for certain is that the premier tomatoes in this part of the world are grown on Johns Island, one of Charleston’s last agricultural areas.  Over the last few years, I’ve taught for Lowcountry Local First as an instructor for their New Farmer Incubation Program. And after each class on Johns Island, I would stop at Sidi Limehouse’s roadside stand on the way to Kiawah and get a pound of shrimp, eggs, okra, blackberries and whatever else caught my eye- maybe a melon or two.  After that,  I would cut across to River Road and stop at Joseph Fields’ farm to get tomatoes.  They are, to me, the best tomatoes around.  They are excellent at all of the Johns Island farms, but these are a smidgen better every time.

What’s the secret to the Sea Island tomatoes?  Part of it has to do with seawater.   Not a lot, but enough in their irrigation water that the tomatoes are stressed a little.  The farms on the sea islands aren’t irrigation with pristine, chlorinated city water.  Their water has dimension.

What does stress have to do with a tasty tomato?  If you grow a tomato (or any plant) under perfect conditions- no insect pressure, no disease, impeccable watering schedule where they never wilt, precise fertilization- they never feel any stress. And what you essentially have is a hydroponic tomato, those plum-sized fruit that you buy in clusters of four or five.  They are better than a pinkish, mealy tomato that you might find on a fast food burger, but they have a long way to go before they would complete with a backyard grown ‘Brandywine.’

When a plant is stressed, they turn energy away from full on growth and begin to produce compounds that help to protect themselves.  These compounds are known as polyphonic compounds, and include lycopene, vitamin C, vitamin E, and dihydrolipoic and chlorogenic acids.  As it just so happens, the production of these compounds make the tomatoes more nutritious for us and TASTIER.  (Here is a link to an NPR ‘Talk of the Nation’ interview that describes the science)

Plants with higher phenolic levels are more tenacious in all ways.  They respond better to pathogens and insects, can handle a little wilt between watering sets and cope well with wind and heat.  Imagine moving a hydroponic basil plant into an open field during a Carolina summer.  Having been coddled since germination,  it wouldn’t last through an afternoon.

The environmental stress of getting a low dose of seawater makes the sea island tomatoes richer and more complex in taste.

HOW TO GROW GOOD TOMATOES

So the question is: Can you replicate this a home?  You can certainly challenge your plants a little bit. Don’t be too perfect in their cultivation or you’ll have tomatoes that taste like water.

If you can, plant your tomatoes in the ground.  Just as wine grapes benefit from terroir, so do tomatoes and other plants.  An artificial potting mix will not allow for the complex mycorrhizal interactions that develop in real soil (My worst tomatoes have been in potting mix).  But if you are limited by space, grow your tomatoes in a pot — only plant cherry tomatoes instead of slicing tomatoes.  You will have a zillion fruits and they will taste good.

I’m going to try to stress my tomatoes a little with seawater this year, just to see what happens.  A few years ago a found an article that talked about how farmers on a small island of Italy purposely water with seawater a couple of time during the growing season — and they are renowned for their tomatoes. 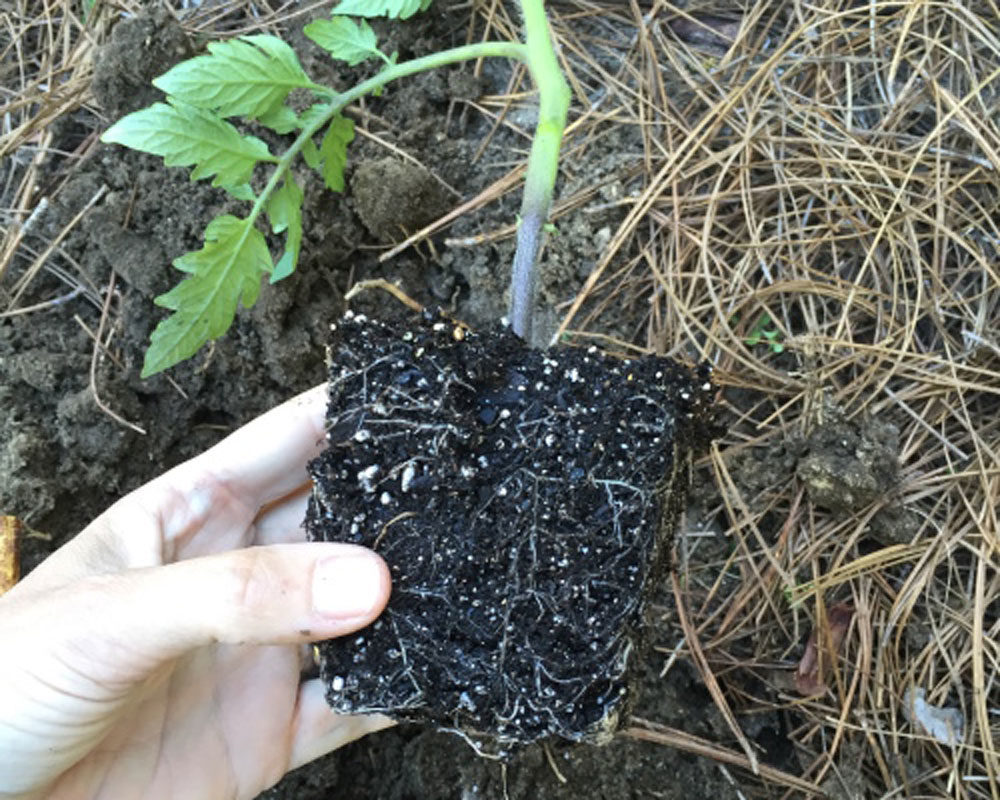 Planting Hope: A young tomato that I put in the ground today.

The research suggests diluting seawater down to 10% (9 parts fresh water, 1 part saltwater) and to water the plants with this solution soon after they are transplanted.  Then do this again about halfway through the growing season, about the time of fruit set.

Now please, don’t do this at home unless you are excited about an experiment.  I really don’t know how this is going to work out.

But I’ll let you know this summer.

Do you want to explore the creeks that wind behind the sea islands?

Then we recommend our Folly Outpost.