The Appeal of Bulls Island

Every once in a while I get on Ebay and search a few keywords that mean something to me.   Sometimes I check out the prices on Jadeite, this dishware that I inherited from my grandmother, to see if there is a piece I want to add to the collection.  Or I’ll look for hard-to-find books for Chris in hardback versions.  I don’t look at Ebay often, but when I do, I always search ‘Cape Romain’ and ‘Bulls Island.’  Quirky items like salt-and-pepper shakers shaped like the lighthouses, old postcards and charts show up pretty regularly.  And you can always get about 500 copies of Dorothea Benton Frank’s book Bulls Island from the site.  (I like to think that the ferry captain of the boat is based on Chris.)

My best find was a few pages ripped from an October 1949 issue of Nature Magazine.  For about five dollars, I was sent a copy of the Table of Contents and the original pages of an article entitled “Cape Romain– More than a Refuge.”  It was written by Anthony F. Merrill, in an earnest style that you don’t see today.

He talks about his experience staying on Bulls Island as a visitor in the Dominick House at the heart of the island. For a room and meals on Bulls Island, it was $6 per day and boat passage was provided by the government for free.  To reserve a room, you sent a letter to the refuge manager and then they would respond with available dates.

Most of the people that stayed on the island came to fish.  In the house, there are copies of the original guestbooks that you can look through, and they are filled with comments about the types, numbers and sizes of fish that guests caught during their stay.

The other typical visitors to Bulls Island were birders.  At the time of this article, Audubon Society arranged birding expeditions twice a week ($15) with a local “distinguished bird man” Alexander Sprunt, Jr.  Again, to arrange the trip, you had to write a letter to the headquarters of the Audubon Society in New York, New York. Unfathomable!

Merrill talks at length about the thousands of Royal Terns that “[jammed] the sandspits on the Cape Romain refuge during breeding season” and the “more than 15,000 waterfowl” that congregated on the freshwater ponds in the winters.

This was way pre-Hugo.  Bulls Island had not been submerged by a 20-foot storm surge and the landscape was lush with a mature canopy of trees.  The island has recovered from the 1989 storm that decimated this portion of South Carolina coastline, but it has not restored to pre-hurricane density.   Many of the grand trees that stitched their limbs together in an overhead quilt of leaves and branches are gone, and it will be decades before their stature is regained.

In Merrill’s observations he writes, “Here are to be found not only the birds for which the refuge is maintained, but also the finest of typical southern coastal scenery.  Great live oaks, laden with long gray beards of Spanish moss, rise magnificently from the lawns around the guest lodge and along the island roadways.  Loblolly pines and magnolias interlace to form, with the live oaks, the major forest cover, and beneath these are the palmettos and other undergrowth characteristic of the area. Woodland roads wander throughout the island, a constant temptation to the leisurely walker.  The wide, open beach seems to stretch endlessly north and south, and along it there is scattered an inexhaustible treasure trove of shells to please the collector or amuse the casual dilettante.” 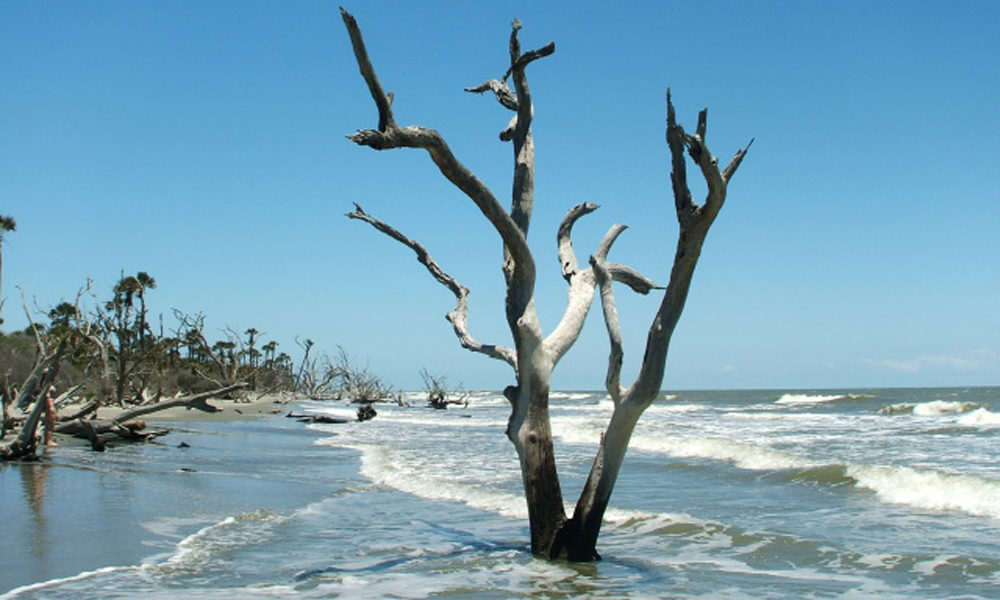 I have seen all of what Merrill saw.  He describes an island that still exists today.  No cars, no pavement, no development.  We did it, y’all.  We, the people, took an island with prime beachfront and didn’t ruin it.  Since it was acquired from Gayer Dominick, a New York stockbroker, in the mid-1920’s, Bulls Island has remained much the same.  It’s a refuge managed for wildlife and the habitat that they so desperately need.  The current refuge manager, Sarah Dawsey, and the refuge staff continue this mission today. It is a haven for 293 bird types, American alligators, sea turtles, bobcats and seemingly countless other species.

The best part?  You can stay in the Dominick House again.  It’s not a true bed-and-breakfast like before, but eight times a year Coastal Expeditions is able to lead multi-day expeditions to the island.  These 3 day/2 night excursions allow visitors to immerse themselves in the natural and human history of the island. Led by naturalist guides with years of experience within the refuge, visitors learn about the native flora and fauna, the history, and an in-depth opportunity to explore the ecological systems of Bulls Island.

Each day begins with coffee and sunrise at Boneyard Beach.  Following a hearty breakfast prepared by Papa Mo, guests set out with a naturalist to hike the island.  Every day is different, with itineraries based on the tides, weather and group. It may include a picnic lunch at the Observation Tower and an evening boat cruise or a pre-dinner oyster roast and a birding walk.

Dinner is a time for communing with each other and talking about the day’s events.  Meals are southern-inspired with a emphasis on being fresh, local and delicious.

The eight trips for 2017 are now available for booking!   Simply click below or call (843) 884-7684.  The dates fill quickly, so if you are interested (and interesting!), go ahead and find a date that works for you!  Find out more about the trip here.